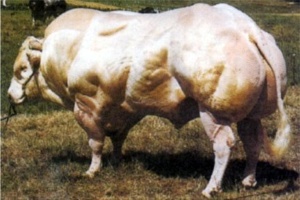 Motor unit recruitment is a seemingly straightforward process as I covered in part 1 and part 2 of this series. But like anything with the human body, eventually a simple explanation becomes, well, not so simple once you look at physiology on a microscopic level.
Just consider the myriad of tasks your motor units must respond to, from explosive “fight or flight” physical reactions to strenuous isometric contractions to landing on a dime after unleashing a double backflip from the uneven bars.
Does the nervous system always follow the same motor unit recruitment pattern, regardless of the task?
Before I get to that, let’s recap what I’ve covered so far. Muscle contractions are controlled by your nervous system and motor unit recruitment occurs in an orderly fashion as more force is required. In the gym, force increases when you lift a light weight faster, or when you lift a heavier weight. Light weights recruit your smallest/slowest motor units, and then additional larger/faster motor units are recruited as force escalates.
For four decades it was assumed that this orderly recruitment was how human neurophysiology was designed to work under normal conditions. Any research which showed otherwise was usually performed on animals. And as any good scientist knows, what’s shown in the lab with animals often doesn’t carryover to humans. (You only need to look at the research on myostatin and the Arnold-esque bull to know this is true.)
Indeed, when I finished my graduate work in neurophysiology in 2005, an orderly recruitment of motor units was still considered the best explanation of how the nervous system responds to demands for higher force.
But science, like any other reputable discipline, eventually evolved to the point where more precise testing methods could paint a clearer picture of what’s really going on. In 2006, Wakeling et al (J. R. Soc. Interface, 3, 533-544) released a study that analyzed muscle fiber recruitment in the three plantarflexor calf muscles: soleus, medial gastrocnemius, and lateral gastrocnemius.
What they found was surprising. By using EMG analysis they demonstrated that the medial gastroc muscle could preferentially recruit the fastest (largest) motor units, even when the slower motor units could still fire.
This research is intriguing because it flies in the face of the orderly recruitment postulate. According to the size principle, if the largest motor units are recruited, the smallest motor units must be working at full force to keep up. However, Wakeling’s team demonstrated a drop in activity from the smaller medial gastroc motor units while the largest ones were working at breakneck speed.
How was this possible? According to the study, an interneuron in your spinal cord, the Renshaw cell, can inhibit the small/slow motor units. Look at the image on the right and you’ll see two motor neurons (in black) that exit your spinal cord and control your muscles. You’ll also see an arrow from each motor neuron that feeds information back to the Renshaw cell (shown in red). 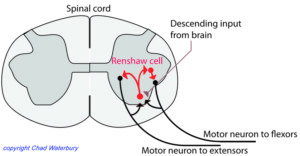 This Renshaw cell takes information from the motor neuron and can inhibit the small motor units in order to favor the large motor units.
Think of the Renshaw cell as being a general in the military: it distributes fire power to the units that need it most.
Too much science? Ok, let’s step back and look at the big picture.
When your goal is to get bigger, stronger, or faster, you must recruit the largest motor units. This is accomplished by lifting heavy some of the time, and lifting fast other times when you’re training with lighter loads. How did Wakeling’s team target the largest motor units? With fast contractions. Here’s a line from the paper:
“…one factor that can lead to the preferential recruitment of faster motor units is rapid shortening velocity of the muscle…”
Everyone knows that getting bigger and stronger requires you to lift heavy. But some people still aren’t sold on the importance of fast contractions with submaximal loads. Even though this research demonstrates that the size principle might not hold true in every muscle contraction, it still gives credence to the point I always try to make in my books and seminars: you must tap into the largest motor units to get rapid results.
The Wakeling study is just another piece of science which helps explain the power of explosive contractions to get you there.
Stay focused,
CW