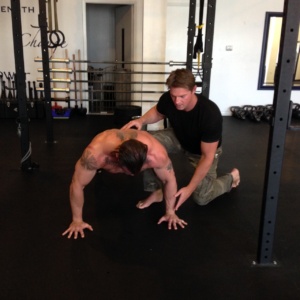 In my blog last week I mentioned that I’ll be covering some of the ways HFT2 – coming June 24 – will be better than the original HFT system I created in 2012. So today I’m going to briefly describe one of the most popular muscle growth triggers I’ve been experimenting with over the last year.
When it comes to building muscle, isometrics have gotten a bad rap. But they will definitely add muscle when you do them correctly and at the right time. If you haven’t experienced appreciable muscle-building results from isometrics it’s probably due to one or two reasons.
First, you did them when you were already fatigued, such as the end of a set. This drastically limits the number of motor units you can recruit – especially the largest motor units. Second, you probably added them on top of what you’re already doing in your workouts. But there’s only so much growth you can trigger in one workout – and it’s not much – so adding more volume to a single workout is rarely going to work.
So why are isometric contractions good for hypertrophy? There are three reasons:
1. It produces the highest levels of muscle tension: To stimulate the most growth, you need the highest levels of muscle tension. If you were involved in a scientific lab study that measured your maximum strength, the scientists would most likely have you perform a maximal isometric contraction against an immovable object in order to see how much force your muscle could produce.
Scientists use isometric tests in studies because they know it’s the best way to measure a maximum voluntary contraction (MVC). Put another way, a MVC is measure of your highest level of muscle tension. Importantly, the highest levels of tension coincide with the highest levels of motor unit recruitment. More tension equates to a stronger growth stimulus.
2. Increases cortico-motor excitability more than regular reps do: Your brain has a motor cortex region that correlates with each area of your body, known as a homunculus. Your hands and face represent a big portion of that homunculus, but many of the muscles you’re trying to build represent only a small region. This means it’s tougher to fully engage certain muscles because your brain doesn’t devote much space to it – unless you practice tensing that muscle frequently. 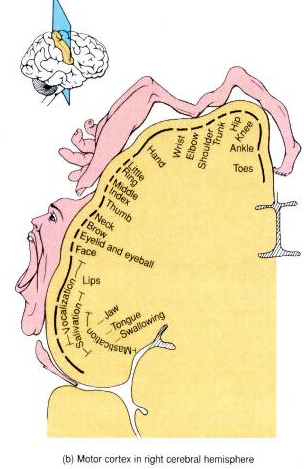 One reason why beginners rarely feel their glutes firing is because the area of the motor cortex devoted to the glutes (hip) is very small. Chris Powers, Ph.D., has performed more lab research on the glutes than anyone I know. In the first few weeks of his protocol he has clients perform long-duration isometric holds for the glutes because his research has shown that it improves the brain’s ability to turn on the glutes, and improve cortico-motor excitability, better than regular contractions do.
In order to grow a muscle group, you must be able to achieve the highest level of tension in that muscle. Intense isometric contractions are an excellent way to develop the neural link between your brain and the muscles being trained. Enhancing this descending neural drive is crucial for hypertrophy.
3. Less stressful to the joints: The point of High Frequency Training (HFT) is pretty obvious – train a muscle more often to make it grow faster. However, if you double or triple your training frequency with typically barbell and dumbbell exercises you quickly run into a wall that’s built of fatigue and joint strain.
Think of the bench press. When you perform a full range of motion rep, it puts much more stress on the connective tissue of the shoulder joints, mainly at the bottom of the movement. Adding more bench press sessions to your current routine can literally be a pain.
This is where isometrics fit in perfectly. When you follow the techniques I lay out in HFT2, you’ll maximally stimulate the pecs without putting excess strain on the shoulder joints. It’s taken me years to figure of the best ways to stimulate muscles more often without wearing the joints down.
Other times, however, a terrific way to stimulate growth is with body weight exercises that combine isometric “squeezes” with full range of motion reps. Here’s a quick preview of one technique in HFT2 that shows what I’m talking about.

You’ll notice that the longest squeeze (5s in the above video) is performed at the beginning of the set when the muscles aren’t fatigued. Subsequent isometric squeezes shorten in duration as the set proceeds to coincide with the escalating level of muscle fatigue.
These type of sets became very popular with my clients for two reasons. First, if you perform each squeeze with 100% effort, you only need one set to stimulate growth. Second, since most of the exercises that use the squeeze-countdown are body weight moves, you can do them anywhere. And a key to success with HFT2 is having the luxury of triggering muscle growth anywhere, anytime.
Add the squeeze-countdown push-up technique into your current training schedule, either on a day you don’t train the chest or at least 6 hours away from your chest training workout. Start with 3 times per week, spread out as evenly as possible (e.g., M-W-F) and add a fourth session the following week. This, in addition to your current routine, should double or triple your training frequency for the pecs.
And that’s how you make them grow!
Stay Focused,
CW

3 Ways to Improve Your Pull-up Performance

Climb Your Way to New Muscle