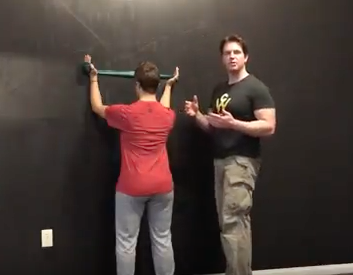 Improve Shoulder Health and Strength with the Elbow Wall Walk

There is no doubt that many people have cranky shoulders. This is especially evident when they try to lift their arms fully overhead, or when they’re trying to military press with proper form. When you see a guy or gal…

END_OF_DOCUMENT_TOKEN_TO_BE_REPLACED 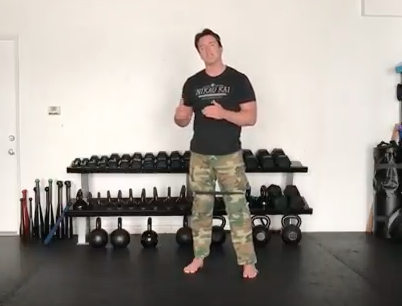 Corrective Exercise, Gain Strength, How To Build Lean Muscle, How To Get Ripped, Mobility Exercises, Relieve Joint Pain May 30, 2017 0Comments

Everyone wants better glutes, whether you’re a guy or gal, athlete or non-athlete. That’s because glutes that are awesomely developed not only make your body look better, but they can also drastically improve your performance. When the glutes are strengthened and…

END_OF_DOCUMENT_TOKEN_TO_BE_REPLACED

How to Customize Your Training

Eric Cressey stops by to discuss the four essential factors for determining exactly how you should train.

END_OF_DOCUMENT_TOKEN_TO_BE_REPLACED

Learn how to do the goblet squat with lateral shift to improve your squat and hip mobility.

END_OF_DOCUMENT_TOKEN_TO_BE_REPLACED

Gain Strength, How To Build Lean Muscle, How To Get Ripped, Mobility Exercises April 5, 2011 0Comments

Single-limb exercises, especially for the lower body, are essential for everyone, regardless if they’re a pro athlete or weekend warrior. The benefits of single-leg exercises are numerous, but a few key points to mention are that they recruit additional hip…

END_OF_DOCUMENT_TOKEN_TO_BE_REPLACED

Eric Cressey is one of the few people I keep in my circle of advisors. He’s been training, studying, lifting and writing with passion and enthusiasm that’s rare in this field. Cressey Performance is definitely a place to check out if you’re in the Massachusetts area. So if you missed part I of my interview with him, be sure to check it out here.
Now we’ll pick up the rest of his interview where Eric discusses his awesome new training manual, Show and Go, for a bigger, stronger, healthier body.
CW: I got a good laugh reading your statement in the introduction of Show and Go. You said, “This book is for people who give a sh*t.” Care to elaborate?

EC: I was actually pretty excited to be able to swear whenever I wanted; I guess that’s the beauty of self-publishing!  Rather than reinvent the wheel, I’ll share a little excerpt from the text that I think will answer the question:
““…you’ll find that the tone of this manual is much less conversational and entertaining, and much more “troubleshooting” and “do this and get diesel.” Fortunately, just as you’re more tolerant to cursing, you’re also more tolerant to training programs that will challenge, educate, and motivate you to all news levels of strength, performance, and health. My feeling is that you didn’t purchase this e-book to be entertained; you purchased it to get direction and results.

END_OF_DOCUMENT_TOKEN_TO_BE_REPLACED

An Interview with Eric Cressey Part I

I first learned about Eric Cressey back in 2004 when he wrote a cool article on rotator cuff training for T-nation. Since that time Eric has quickly climbed to the top in the fitness industry. His knowledge of strength training and performance development is awesome (Cressey has a monstrous deadlift). But his techniques for corrective exercise – especially the shoulder – is what really sets him apart. In fact, when my brother recently injured his rotator cuff, Eric Cressey is the first person that came to mind to help him. Cressey Performance in Massachusetts has become one of the most sought-after training facilities in the country for everyone from professional athletes to weekend warriors.
When Cressey talks, I listen, because over the last 7 years he’s spent more time in the trenches than just about anyone I know. And that’s why I’m happy to have him as a guest this week.
So let’s get to it!
CW: First off, thanks for taking time out of your schedule to chat. Here’s my first question: Since you work with a lot of high-performance athletes, what are three principles that apply equally to athletes as well as non-athletes?
EC: I think people would be surprised to realize just how similar the Average Joe or Jane is to a  professional athlete – both socially and physically.
The lay population often sits in front of a computer for 8-10 hours a day, but many pro athletes have 4-8 hour flights or 10+ hour bus rides where they’re sitting – and because they’re taller, sitting is even more uncomfortable and problematic.  Like everyone else, they spend time surfing the internet, Skyping, playing video games, and goofing around on Facebook/Twitter.  The advances in technology have hurt everyone from a physical fitness standpoint – but brought the “Pros and the Joes” closer together, believe it or not.
They’re also very similar in that they want the most bang for their buck.  Most pro athletes are no different than anyone else in that they want to get in their training, and then go to visit their families, relax, play golf, or whatever else.  They really don’t have interest in putting in six hours per day in training outside of the times when they have to do so (especially during the in-season).
With that in mind, three principles that are crucial to the success of both populations are:
1.  Realize that consistency is everything. I always tell our clients from all walks of life that the best strength and conditioning programs are ones that are sustainable.  It’s not about working hard for three months and making great progress – only to fall off the bandwagon for a month.  This is absolutely huge for professional athletes who need to maximize progress in the off-season; they just can’t afford to have unplanned breaks in training if they want to improve from year to year.
If a program isn’t conducive to your goals and lifestyle, then it isn’t a good program.  That’s why, when I created Show and Go I went out of my way to create 2x/week, 3x/week, and 4x/week strength training options – plus five supplemental conditioning options and a host of exercise modifications. I wanted it to be a very versatile resource.
Likewise, I wanted it to be safe; a program isn’t good if it injures you and prevents you from exercising.  Solid programs include targeted efforts to reduce the likelihood of injury via means like mobility warm-ups, supplemental stretching recommendations, specific progressions, fluctuations in training stress, and alternative exercises (“plan B”) in case you aren’t quite ready to execute “Plan A.”

END_OF_DOCUMENT_TOKEN_TO_BE_REPLACED

Here’s a situation I’ll bet you’ve experienced many times. You run into an old friend. That friend recently started working out again and he or she is looking more fit. So you ask your friend how things are going with…