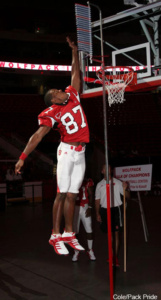 Every guy wants to be strong. There’s no better way to get strong than to lift heavy loads for a few sets of a few reps a few times per week. You can’t go wrong with 3×3 (3 sets of 3 reps) every 3-4 days to build strength. Research is clear that building maximal strength will improve your speed and explosiveness – at first, anyway.
However, there comes a time when simply lifting heavy won’t get the job done. This is especially true if you’re an athlete who needs high levels of explosive strength.
After you have a few years of heavy lifting under your belt it’s important to improve your explosive strength with fast lifts. Maximal strength training builds your force capacity, but that newfound strength won’t necessarily make you punch or kick harder, or sprint faster. You must bridge the gap between the force your muscles can produce and your ability generate high levels of force very quickly.
Let’s say you’re a trainer who’s working with a MMA fighter, and let’s say you use a standing one-arm cable chest press to boost his punching power. If you increase his strength in that exercise from, say, 90 pounds to 160 pounds it’s easy to think that he’ll be able to punch harder.
In the outstanding text, Strength and Power in Sport (2nd Edition), Zatsiorsky states that “it takes usually in excess of 0.3-0.4 sec to generate maximum force.” However, many fast movements such as a punch or kick usually occur in approximately 0.1 sec.
So how do you train your muscles to develop force more quickly? By enhancing rate of force development (RFD). The benefits of improving RFD are vast, however, here are three of the primary benefits:
1. Earlier recruitment of high-threshold motor units: By recruiting your largest motor units earlier, you’ll be able to reach your peak levels of force more quickly.
2. Enhanced maximal discharge rate of motor units: A muscle boosts its force by recruiting more motor units. Once those motor units have been recruited the nervous system sends a signal to the motor units to fire faster (this is known as rate coding). A motor unit can increase its force 10-fold when it reaches its maximum firing rate.
3. Increased incidence of “doublets” during contractions: A doublet is defined as a motor unit firing twice in a very short interval (5-20 ms). Doublets allow a muscle to reach peak levels of force faster.
To enhance RFD you must train with relatively light loads and apply maximum acceleration to each lift. With heavy loads, the actual velocity of movement is slow. However, to boost RFD the actual velocity must be fast so the load must be light. Loads that vary between 20-60% of your 1RM typically work well. Movements with light loads and high velocities are known in research as ballistic exercises.
Now, where trainers often screw up with ballistic exercises is with time under tension. To keep acceleration high and fatigue in check you should stop each set once the lifting speed slows down noticeably. Merging your sets into slow grind reps won’t boost RFD as effectively as keeping the reps fast. As a gross generalization, sets of ballistic exercises should terminate within 10 seconds. After 10 seconds your speed will slow down because the largest motor units that will start dropping out.
Put another way, if your speed doesn’t slow down within 10 seconds you didn’t recruit the high-threshold motor units to begin with. It’s imperative to tap into your largest motor units because they produce the most power. How? The largest motor units contain the largest bundle of your strongest muscle fibers. If you leave these motor units untapped your RFD will suffer.
There’s one limitation, however, with applying maximum acceleration to a standard exercise such as a squat or bench press. As you approach lockout the nervous system will decelerate the lift to protect your joints. Research (Elliot et al 1989) demonstrates that 52% of the total duration of a bench press with 80% of 1RM is deceleration. This is bad news since deceleration forces motor units to drop out. Therefore, enhancing RFD requires exercise modifications.
The key is to perform exercises that continue past lockout in order to short-circuit deceleration.
Two of my favorite exercises to boost RFD are jump squats with 25% of 1RM across the upper back and clap push-ups. Here’s a simple workout to enhance RFD.
1a Jump squat with 25% of 1RM for 3 reps
Rest 30 seconds
1b Clap push-up for 3 reps
Rest 30 seconds, repeat 1a/1b pairing seven more times (8 rounds total)

Perform this short workout twice per week at the beginning of your regular workouts and you’ll bridge the gap between strength and power.
Stay Focused,
CW

How to Improve Your Sleep

Huge in a Hurry Clarified