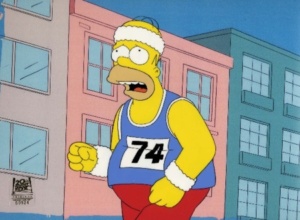 It’s that time of year when people are looking to get back in shape, and most of them start by running. It’s simple, it requires no equipment, and you can do it almost anywhere (unless you’ve been living in the upper Northeast). Running appears to be a logical way to burn fat and calories, and since anyone can do it, the assumed risk is very low. So you start by running or jogging a few miles every other day.

However, let’s say you asked a personal trainer to design a program to restore your fitness. What if that trainer wrote out a workout and told you to do 3500 reps of each exercise? Yes, that’s 3500 reps. You’d consider him a fitness masochist, right? Such a workout would surely destroy your joints.

Well, that’s exactly what running for 2 miles is: thousands of continuous reps of the same movement. It’s definitely not the best way to develop a body that’s in balance. This is similar to what Alwyn and Rachel Cosgrove have been saying for years, and I agree.

If you’re a personal trainer who’s working with an avid runner, put him on a foam roller. Have him roll the inside, outside, and top of his thighs along with the outer hips. You’ll quickly see a look of excruciating pain on his face. Indeed, the repetitive nature of running throws the length-tension relationship of the legs and hips completely out of whack and this causes severe tension. The rectus femoris, IT band, TFL, adductors, psoas, and glute medius will be tighter than guitar strings. Plus, when you test the strength of the leg and hip muscles (especially the hip abductors) you’ll notice more imbalances than a Hollywood shrink sees in a month.

One of the reasons why our hips are so imbalanced is because we spend so little time moving laterally or backwards. When you throw a long-distance, straight-ahead exercise like running on top of it, the situation only gets worse.

That’s why, instead of traditional running, I have my clients perform an exercise I call the X drill. The beauty of the X drill is that it forces you to change directions so you never overload one repetitive hip movement. You’ll constantly alternate between moving forward, backward, side-to-side, and up and down. And when you perform it barefoot in the sand, it’s great for strengthening the ankles and calves, too.

Here’s a demonstration of the X drill:

There are many ways to modify the X drill to suit anyone at any level of fitness. First, you don’t have to perform it in the sand without shoes. Second, the distance between the four corner points can be as short or as long as your space and client allow.

Each time you return to the starting position is one rep. I like to have my clients do anywhere from 5-10 reps between sets of strength exercises, or combined with another conditioning drill. The X drill is also great to do with a weighted vest, or you can have them do a more complex movement at each corner. For example, instead of squatting down to touch the ground at each corner they could do a burpee or squat thrust with a jump. The options are endless.

Speaking of metabolic training, Lou Schuler and Alwyn Cosgrove just released the third installment of their outstanding fitness series, The New Rules of Lifting for Abs. It contains a ton of excellent training and nutrition information to help you build a leaner, stronger body. Particularly, I like the options they outline for novel cardio exercises when space and equipment are limited.

You can check out the book at this link:
The New Rules of Lifting for Abs: A Myth-Busting Fitness Plan for Men and Women Who Want a Strong Core and a Pain-Free Back

13 thoughts on “A Different Way to Run”