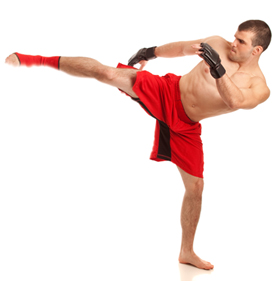 As an athlete, there are two different types of training. First is a bodybuilding style where your focus is primarily on the muscles. Performance doesn’t really matter in terms of building your speed, reactive ability, etc. What matters is that your muscles are getting bigger through high tension exercises.

Then there’s performance development. With this style of training the primary goal isn’t bigger muscles. Sure, you can enlarge your muscles with performance training if the parameters are right. However, when you’re training for performance you’re basically training your nerves. In other words, simply making your muscles bigger won’t make you explode off the line faster or jump higher.

Both types of training have their place whether or not you’re an athlete. For athletes, rate of force development (RFD) reigns king, as I mentioned in my previous post. RFD is your ability to quickly reach peak levels of force. This requires “nerve training.”

Now, gaining mass through a bodybuilding style of training won’t make you reach your peak force faster, but it can help you develop higher levels of force. There’s a positive correlation between cross sectional area (muscle mass) and force production if you hypertrophy the right muscle fibers. This requires “muscle training.”

I took the three ways science demonstrates that you can improve RFD and manipulated the parameters enough to grow your largest muscle fibers. This training will be known from here on as my NMD system, which stands for Neuro-Muscular Development.

I want to continue with the leg training example I gave in my previous post. Why the emphasis on the legs at first? Because that’s where most of your full body explosive power comes from.

The NMD system consists of three different types of training in a specific order for each workout. You’ll start with a sensorimotor (balance) exercise, followed by a ballistic or plyometric exercise, and finish up with a maximal strength exercise.

Balance Strength
For the legs, there are many ways to challenge your balance. For some, standing on one leg without shoes on a padded surface for 20-30 seconds is enough. Better conditioned athletes can stand on one leg and move their opposite leg around in a 180 degree motion from front to back with their eyes closed.

I have my athletes make the single leg balance more difficult by using a balance beam. They stand on one leg and perform a 1/4 squat in order to make the exercise more dynamic. Not so dynamic that it loses sight of the focus of developing balance, but dynamic enough to increase the challenge of the exercise.

Importantly, the balance portion of the NMD system isn’t supposed to make you tired. The purpose is to enhance sensory feedback between the muscles and spinal cord which sets you up for more powerful contractions in the ballistic exercise that follows.

The sequence in the video takes most people around 40 seconds to complete (20 seconds of total time under tension for each leg). Perform three sets of the sequence with one minute of rest between each.

Ballistic/Plyometric Strength
Ballistic and plyometric training are similar in the sense that they both use submaximal loads for fast, explosive muscle contractions. The difference, however, is that plyometric exercises always rely on the stretch-shortening cycle (SSC). For example, jumping up to a high box and then stepping off is a ballistic exercise. On the other hand, quickly jumping up and down with minimal ground contact time is a plyometric exercise.

I always start my athletes, or anyone who is new to the NMD system, with a ballistic exercise because it consists of lower impact forces and it’s less fatiguing. Remember, this part of the workout is followed by a maximal strength exercise with enough volume to hypertrophy the targeted muscles so fatigue must be managed. The goal of this part of the workout is to potentiate the nervous system, not fatigue it.

Here’s a video of me demonstrating the high box jump. Since I don’t immediately jump down and quickly reverse the movement, it’s a ballistic exercise.

You’ll notice in the video that the box I’m jumping on is padded. This helps reduce the impact forces even more. I know virtually none of you will have access to such a large, padded box, but don’t sweat it. I use it because I have access to it. Any elevated, solid surface will work.

Maximal Strength
This is the most straightforward part of the workout so it needs little explanation. You’ll use any lower body strength exercise and perform 3-8 sets of 3 reps. If the athlete is weak and needs plenty more maximal strength I’ll do 3 sets of 3 reps in order to keep the load as high as possible. If hypertrophy with a secondary emphasis on strength is the greater goal, I might do 8 sets.

Here are two examples of the NMD for Legs workout:

This should give you enough information to experiment with my new NMD system. Start with the legs and we’ll build from there! 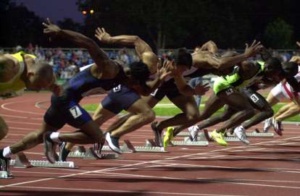 The difference between the winner and loser in a race, fight, or game usually boils down to one fitness quality: rate of force development (RFD). This is a measure of how quickly you can reach peak levels of force. The guy who can land a roundhouse kick or explode off the line or elevate for a jump shot first is the dominant force.

It works the opposite way, too.

When an aging athlete is trying to hang onto his illustrious career, you’ll never hear a commentator say, “Well, he’s faster than he used to be but he’s no longer at the top of his game.” Quickness and athletic proficiency go hand-in-hand. There’s a reason why 42 year-old athletes aren’t breaking world records in the 100 meter or winning a slam dunk contest. It’s because their RFD has diminished. Every power sport you could possibly think of hinges on your ability to produce high levels of force at the flip of a switch.

So as a performance trainer I’m most concerned with how my power athletes improve their broad jump score since it’s one of the simplest and most effective ways to measure RFD. 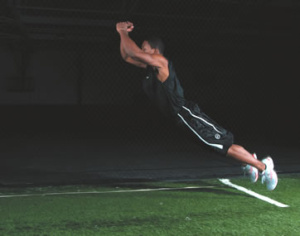 But jacking up your RFD does more than just improve your jump. Indeed, enhancing your RFD can help you build more muscle, too. We all know that adding load or speed to the barbell will upregulate protein synthesis. What’s often overlooked is that lifting heavier or faster requires you to tap into your force-producing capacity quicker than before.

Now, for the essential question. How do you improve RFD?

Research demonstrates three separate ways. First, and most obvious, is through explosive strength training with a submaximal load (Newton et al, Med Sci Sports Exerc 1999). So you’ll start with a load you could lift, say, 10 times but only do three super fast reps. The second scientific way to boost RFD is through maximal strength training with a heavy load and low reps (McBride et al, J Strength Cond Res 2002). The third way to improve RFD is the one that’ll surprise you most.

In physical rehabilitation settings it’s common for physical therapists to prescribe balancing exercises to retrain muscle firing patterns after an injury. These exercises such as standing on one leg on a wobble board are known as sensorimotor training (SMT). Therapists knew it helped patients regain their balance, but it wasn’t until research dug deeper into SMT that another surprising benefit surfaced: balance exercises improve RFD (Gruber & Gollhofer, Eur J Appl Physiol 2004).

So I started experimenting with different combinations of explosive strength, maximal strength, and sensorimotor training. My goal, of course, was to enhance their RFD as primarily determined by an increase in their broad jump.

I found two different sequences that produced outstanding results. The first sequence is covered in the current (October) issue of Men’s Health magazine. You’ll start with a balance exercise, followed by a ballistic exercise, and then you’ll finish with a maximal strength exercise.

Here’s a sample sequence for the lower body.

I’ll be discussing much more about this style of training in upcoming blogs so stay tuned!