I get a lot of insightful questions every week and I do my best to get them answered. Sometimes, while writing out an answer I realize that many more people could benefit from the information. Therefore, today I’m sharing one answer to a recent question I received.

Chad, I want to say thanks for all you do. Because of you I lift fast, use full body workouts, incorporate single leg exercises, use high volume body weight exercises. At 31 I’m in the best shape I’ve ever been in my life! I’m 6’2″ and since Thanksgiving of last year have gone from 220lbs to 199. I was also able to keep my combined chest/shoulder measurement at 55″ while dropping my waist from 36 to 32 inches! I owe it all to Huge in a Hurry and your articles.

On to my question – sort of a “hypertrophy debate.” I’ve always thought that the squat and deadlift were the king of the mass builders – if that’s what you’re going for. However, lately I’ve read that the front squat may offer more in the way of muscular development…and the same for the stiff-legged deadlift. Can you weigh in on this for me? -Joseph C.

CW: Thanks for the kind words, Joseph. Yes, the squat and deadlift are two of the best mass builders you’ll find because they primarily target the largest muscles in the body. Now, the terms “squat” and “deadlift” have different definitions in different populations. For some, that literally translates to mean the barbell back squat and deadlift from the floor.

So the question is: which variation best suits your body type?

Most people can’t perform a barbell back squat correctly. It’s actually one of the most difficult lifts to get right, even though it’s considered a basic strength exercise that everyone should start with. The problem with the barbell back squat is that it requires high levels of mobility in the ankle, hips, adductors, hamstrings, T-spine, and shoulders. Plus, you need to have plenty of stability strength in your core or else you’ll lean excessively forward “in the hole.” If you pass all those requirements, the back squat is a good exercise.

The sequence of pics below shows the ideal form for the barbell back squat. If you can drop your hips below your knees with your heels down and your torso at 60-70 degrees, go for it. 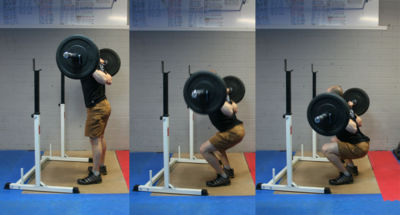 But for most people there are better options, especially if you’re tall or have long legs.

The front squat has gained a lot of popularity over the years because the biomechanics are easier to get right. Since the load is in front of you, you can sit back easier without losing your balance. Second, you don’t need as much dorsiflexion in your ankle joints to do the front squat with perfect form. A lack of dorsiflexion (the ability to pull your foot toward your shin) is common in most people.

In terms of overall muscle activation, the front and back squat work many of the same muscle groups. People with a history of knee problems typically fare better with the front squat, as mentioned in this study a few years ago (Gullet et al J Strength Cond Res 2009).

The front squat has its shortcomings though, mainly with the Olympic style grip. It requires a lot of wrist extension mobility to maintain the wrist and upper arm position shown in the picture below.

The good news is that there are many ways around this limitation. You could cross your arms and rest the barbell across the deltoids. The key with this variation is to keep your elbows pulled as high as possible throughout the movement. Your upper arms should never drop below parallel. But this version can be a little scary for those who lift heavier loads. 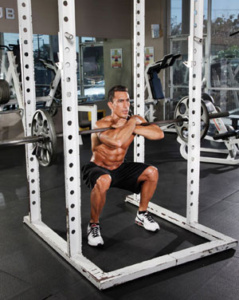 The best option for a lot of people is the version with two kettlebells. It doesn’t put excess strain on the wrists – precisely the reason I use it with the fighters I train – and you can push your hips back and maintain a relatively upright torso better than the arms-crossed version with a barbell. 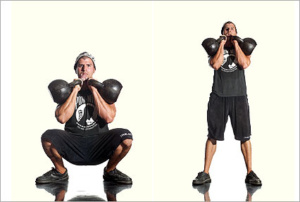 Now for the deadlift.

If you can maintain lordosis (an inward curvature of the low back) from the starting position with the barbell resting on the floor with 45-pound plates, the regular deadlift is an excellent exercise. If that’s a problem, the solution is as simple as pulling the barbell from a higher position such as just below the knees. Partial deadlift variations are outstanding for building mass because you can use more load while keeping your form in check since the range of motion is shorter. 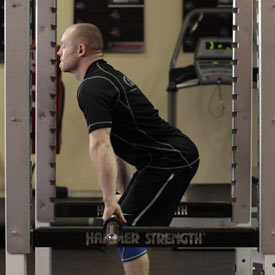 I don’t recommend a stiff-leg deadlift in its truest sense with the knee joints being completely locked throughout the movement. There’s no significant advantage to doing it that way and you can get just as much muscle growth and development by allowing your knees to slightly flex as your torso shifts forward.

I always incorporate single-leg versions of the deadlift and squat into my programs since they effectively overload the targeted muscle groups while minimizing compressive forces through the spine. Don’t underestimate the drain that huge compressive forces can put on your recovery. This is why you can perform single leg versions more often than its double-leg counterpart. Training more frequently is essential for fast hypertrophy.

Double-leg strength exercises have their place, though.

The barbell squat and full deadlift overload many of the same muscle groups, but as a gross generalization most people think the squat is better for emphasizing quadriceps development and the deadlift is better for the hamstrings. That’s only true if you think of each exercise with the standard form. For example, if you use a snatch grip and have the mobility to drop your hips low, the deadlift can be an excellent quadriceps builder. 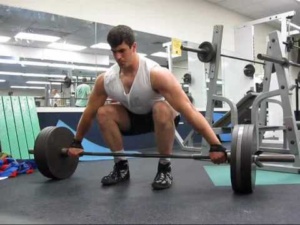 Regardless of the deadlift variation you use, I always recommend an unmixed grip with both palms facing down because it helps keep the wrist, elbow, and shoulder joints in balance and it minimizes the chance of a biceps tear.

The squat and deadlift are indeed two of the best strength exercise for quickly adding mass to your largest muscle groups. One isn’t necessarily better than the other, it just depends on which version you feel most comfortable with when using heavy loads. In either case I recommend doing them barefoot or while wearing Vibram shoes.

If I had to pick two I’d recommend the double kettlebell front squat (aka, goblet squat) and a partial deadlift with the pins set just below the knees. It’s tough to go wrong with those two, and they complement each other perfectly.

A guy with a puny chest pretty much looks like crap, not matter how big his other muscles are. There’s something about well-built pecs that screams “Warrior!” Or maybe it’s that a thick chest makes you more likely to reflect a lone spear that’s flying through the air? Beats me, but one thing’s for sure: all guys want a big chest, and all women want a guy with impressively powerful pecs. It’s hard-wired into our DNA.

Research shows that women are more sexually attracted to men who have who a low waist-to-chest ratio. You know, that V-shaped look. And yes, research was actually performed and money was spent to come to this blatantly obvious conclusion.

The cool thing about building a more powerful chest is that it can be done remarkably well without any equipment whatsoever.

I’ll tell you right now that adding meat to your chest doesn’t require much ingenuity. Start doing 100 push-ups every day and you’ll get the job done. However, there are two shortcomings with this approach.

First, you won’t build a powerful chest that way. Developing muscular power to elite levels requires a more explosive approach. High volume push-up training develops muscular endurance without regard for power. Since the pecs respond well to sets of high reps, doing 100 push-ups each day might make your pecs bigger but it won’t make you punch much harder. Second, it’s likely that the length-tension relationship around your shoulder joint will regress when you do nothing but traditional push-ups all the time. At the very least, it will magnify underlying shoulder dysfunction. This leads to pain that eventually makes you stop all chest work, and damn it if you’re not back to where you started.

So I’ve put together a plan that will supercharge your pecs, improve shoulder health, and build knockout power at the same time.

Preparing for chest training couldn’t be any simpler. Start with 20 arm circles in each direction. The circles should start small and get progressively larger every few reps. By the time you reach rep 15 you should exaggerate the range of motion as much as possible. Also, do these arm circles faster and faster over time. Don’t rip into 20 high-speed arm circles for the first workout because you can strain your pecs, but train those muscles over time to withstand fast arm circles.

Activate the Core: side plank with rotation

Before my clients do any chest training, I always have them perform the side plank with rotation. This exercise activates the lats and side core muscles which immediately enhances your upper body pushing power.

If you’re ever in a bar with one of those punching bag machines that measures the power of your punch and your buddy bets you $50 he can puncher harder than you, run to the pisser and do this exercise first. When you return, he won’t suspect a thing and you’re sure to beat him. Well, unless he’s Shane Carwin. In that case you’re screwed.

Perform one set of 10 rotations on each side. This exercise should be performed slowly with maximum core tension throughout the movement.

Once the core and lats have been activated it’s not time to jump into any explosive training just yet. To protect the shoulder joints it’s important to activate and strengthen the rotator cuff while boosting stability in the glenohumeral joint. The hand over hand exercise gets the job done.

Perform one set of five holds on each side (10 holds total). Hold the position for 1-2 seconds each time before switching sides.

Now it’s time to turn up the juice with an exercise I use to build explosive power in the chest and core. The 3 position hand hop is an outstanding exercise for fighters because it trains your chest to fire with the core. When you jump your hands out to different positions, your core has to perform a powerful contraction to stabilize your torso. Each set should be performed with maximum speed.

Perform three reps as fast as possible. You’ll jump your hands out to three different positions and back to the center for one rep. Perform five sets of three reps with 30 seconds rest between each set. This exercise is ideal for building explosive punching power.

For fighters who need more shoulder endurance, perform as many reps as possible before your technique breaks down as an alternative to just three reps. This approach is also excellent for building muscle.

At this point you have two choices. You can stop here if your chest is already smoked from the hand hop, and if chest power is your primary goal. Or, if you really need more chest mass this is the perfect time to knockout two sets of as many reps as possible with the good ol’ fashioned push-up.

Use a hand position that’s shoulder width, or slightly wider, and use a variation that allows 25-30 reps for the first set. For most guys this will be a regular push-up. However, if you can do more than 30 at this point in the workout, elevate your feet on a flat bench or Swiss ball.

For the second set, repeat the same exercise and do as many reps as possible, even if it’s not 25 reps.

Perform the following routine every other day for four weeks. Put this at the beginning of your workout on the days you perform your regular training.