It’s been said a million times by fitness experts and regular folks. I’m sure you’re tired of hearing it, but I’ll bet you feel the same way as I do: I hate to diet.

Being a “foodie” by nature makes my distaste for dieting even stronger. I love food, and I won’t deprive myself in any way. When I need to lose fat I simply add foods into my diet while I drop others out. So instead of having a sweet potato with a piece of lean beef I’ll eat broccoli with the beef instead. That way, I’m not eating less food (in terms of bulk) but I’m getting fewer calories and more nutrients.

And that, my friends, is the KEY to fat loss: feed your body fewer calories but more nutrients. You see, nutrients are all those magical little chemicals that are found in vegetables, fruits, and lean protein. Nutrients feed your metabolism while promoting health. The amount of nutrients in a half cup of fresh blueberries far exceeds what’s contained in a baked potato, and it has only a fraction of the calories.

When people go on a diet they end up starving their metabolism which, in turn, causes their body to hold on to every spare ounce of fat. This is a hard-wired protective mechanism that kept us alive back when food was scarce. Now that food is widely available, this metabolic shift is nothing more than a hinderance that keeps you from seeing your abs. Simply substituting a white carb (bread, pasta, potato) with a half cup of berries will help promote fat loss.

High fiber foods are even better. Fiber really is nature’s fat burner since foods that have plenty of it satisfy your cravings and stabilize your blood sugar. In essence, you’ll eat less and feel satisfied for longer periods just by adding the following foods into your diet. Replace any white carbs with the following and you will lose fat:

For example, have quinoa for breakfast instead of toast. At lunch, eat black beans instead of a white potato. For dinner, eat a cup of fresh raspberries for dessert and skip the pasta. These simple steps boost fiber, reduce total calories, and feed your metabolism the nutrients it needs to stay running strong.

Another trick is to add spices to your food. This boosts the flavor of your meal and since spices are the most nutrient-dense foods on the planet you’ll invariably boost your health along the way. Cinnamon and cumin, for example, are two of the best spices since they can help promote weight loss.

Breakfast is an especially important time to flood your body with nutrients so your metabolism will kickstart after going for hours without food. Here’s one of my favorite shakes to get lean.

Mix in a blender in 16 ounces of water:

This shake is low in calories but it contains more nutrients than most people get in a day. And don’t worry about the spinach, you won’t even know it’s in there.

In my soon-to-be-released program, Body of F.I.R.E., that burns fat and builds athleticism, I discuss in great detail which foods you should eat at what times. That way, you won’t starve yourself or feel deprived, but you will shift your body into fat-burning mode.

Everyone wants a lean, sexy core. Whether you’re male or female, a defined midsection is what separates an average body from an incredible body. There’s no honor in sporting big guns and cannonball delts if you’ve got a spare tire. And what woman wants to be relegated to covering her midsection with a towel wrap at the beach?

The first, and most important, step for getting a washboard stomach is with the right diet. Replace all carbs with vegetables, take two teaspoons of Carlson fish oil at breakfast/lunch/dinner, and eat one gram of protein per pound of lean body mass (LBM = total weight – fat weight).

Once your diet is in order, then it’s time to focus on your training. You can find hundreds of crazy ab exercises (most of them do more harm than good) on YouTube, but it’s imperative that you master the plank and side plank first. Especially important is side plank endurance. Your core must have sufficient endurance strength before you progress to more esoteric ab exercises. If you skip this step you’re setting yourself up for a back injury.

Dr Stuart McGill, the world’s foremost expert on a healthy core, recommends that you be able to hold the side plank for 75 seconds on each side. In addition, you should be able to hold the plank for 90 seconds. Like all forms of training I put my clients through, the progression occurs in stages. Each stage lasts as long as it takes. Do the following two exercises, one set each day, until you reach the goal. Then move on to Stage II.

Side plank (work up to a 75-second hold) 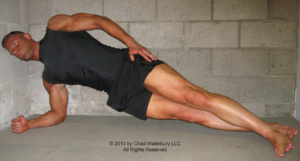 Now that you’ve established your base of strength endurance for your core, it’s time for the next variations. For each of the following variations it’s imperative that you brace your core and do not let your hips shift or rotate one bit. This is harder than it looks when you lock your hips in place. Do the following two exercises, once each day, until you reach the goal.

For the Stage III exercises that build the ultimate core, check out my Body of F.I.R.E. system that’s coming soon. It’s what the incredible Ralek Gracie used to prepare for his fight last Saturday against the legendary Kazushi Sakuraba. (Ralek won, by the way). Check out Ralek’s banner at the beginning of this video for proof: